Capella Resources (KPS.v): Last one to leave turn out the lights, please 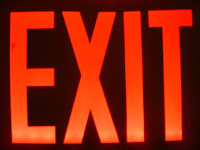 Here follows one small segment from this week’s IKN Weekly about Capella Resources, currently finalists in the 2009 “mining scam of the year” competition due to this information. The time to know what’s below was really Sunday afternoon (when the 9,600 word IKN12 dropped into subscribers’ inboxes) and not after the bell Monday, but consider it a headsup anyway (on KPS.v and on what The IKN Weekly can do for you).

As a small reminder, KPS.v is the company I featured on the blog as the worst scam I’d seen for a long, long time (7)(8) and at that point was in the process of carving up a new prospect for themselves and had excluded previous shareholders from sharing the booty by nefarious means. So what the above PR means is that the insiders that carved up the sweetheart placement in March (each of those units was a share at 6c and a full warrant at 15c and only friends and family were invited) have made about 30% of their 15c warrants whole and will be able to sell them on the open market as from Tuesday 21st July along with the other near 13m shares that come out of escrow (these share escrow period endings are important to keep in mind, as noted last week). As the stock is now at C$0.55 and the company has already said that, through lack of funds, it will not be drilling at its prospective Lajitas property in 2009, expect a large rush for a small exit as from Tuesday as the self-serving scumbag insiders try to get 18 million or so shares turned into cash.

I wouldn’t be at all surprised if the company issues a piece of seemingly good news this week that allows its insiders to sell into volume. Time will tell, but avoid like the plague whatever happens. Again, another ‘caveat emptor’ instance about the crooked ways of the Canadian market and yet again you hear my insistence on the importance of quality managerial teams.