Thanks to reader “J” for the headsup.

What’s the story over at Capital Gold Corp (CGC.to) (CGLD.ob)? The question arises cos it seems like things are getting a trifle, teeny, eensy-weensy bit antsy at board level. Well what would you call it when there’s an en-masse resignation of board members and stuffy letters written to chairpeople that file their filings at the end of the week without bothering to mention a thing to shareholders?

Here’s the SEC Ref F 8-K you need to read and here’s the meat below. Also, keep reading cos underneath Otto got the letters written by two of the pissed-off/pissed-on ex-directors of CGC.to that make it pretty obvious that what went down on August 28th was clearly one of those moments that can easily be described as “a stormy meeting“.

On August 28, 2009, John T. Postle resigned as a director of the Company effective as of the resolution of certain issues with his outstanding options. At the time of his resignation, Mr. Postle served as a member of the Audit Committee, Compensation Committee and the Mergers and Acquisitions Committee of the Board.

Mr. Gifford A. Dieterle
Chairman, President and Treasurer
Capital Gold Corporation
76 Beaver Street
New York, NY 10005
Dear Sir
From your letter seeking my resignation it would appear that that I have lost the confidence of you, management and the Board of Capital Gold. While I seriously dispute the allegations you have made nevertheless I hereby resign from the Board of Directors of Capital Gold Corporation effective immediately. I have been granted certain options which I will exercise and I will submit an expense report for out of pocket costs incurred up until today.
Yours truly 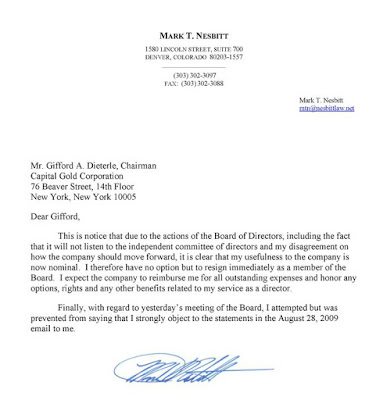 UPDATE: Date-stamped 1:52pm, the dudes at CGC.to must have read IKN and thought “Oh crap, we gotta tell them now”. Here’s the link to the announcement and note the highly prized new boys are also in charge of the financial trainwreck also known as Palladon Ventures, sharing board seats with Capital’s COO, John Brownlie.