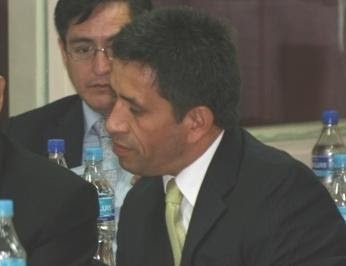 Carlos Rivera
Who is Carlos Rivera and why should you care?
But the real reason you should care is that yesterday, while entering Peru to assist at four proceedings due to take place this week related to alleged government human rights abuses that happened at the time of Alan García’s first term of office in the 1980’s, Carlos Rivera was arrested by Peruvian authorities at Lima airport and thrown in jail on trumped up charges of “false use of a public document”.

The downwards spiral of fascism writ large for all to see. Expect you don’t see it unless you read blogs, because i’ll be damned if I can see a single English language news media running this story.
Meanwhile, Spanish speakers amongst you are strongly urged to hit this link and read the IDL press release published yesterday. It gives a lot more detail on the Rivera case and notes in a point-by-point way the authoritarianism of this move by the García government.

UPDATE: Thanks to the ever-vigil Lillie at Memory in Latin America, we hear that Rivera has now been let out of jail today and is calling the charges totally trumped-up and falsified. Thanks Lillie.