Catching up with Peru’s fight against narcoterrorists 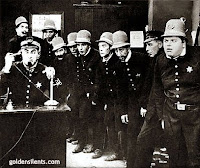 Peru terrorist scum Sendero Luminoso (shining path) used to be a good ol’ fashioned revolutionary insurgent army in Peru. Since those days of the 80s and 90s it has been widely reported as morphing into a drug business, supplying cocaine to the needy noses of the North. Whether that’s the whole truth or whether there’s nuance to the situation is a post for another day, as this missive catches up on Peru’s Dircote police force, spearheading the fight against these people and how they’ve been doing in their role of cleaning up the mean streets of provincial Peru. We hand over to Peru’s RPP medium for the details (translated):
Thursday July 8th 15:57

Terrorist Escapes Because He Was Allowed to Go Out for Lunch, Press Informs

The terrorist Ulser Pillpa, who revealed the identity of active members of Sendero Luminoso in the VRAE region of Peru, escaped due to negligence by the Direction Against Terrorism (Dircote) department, according to press reports.

The newspaper La Republica has indicated that following his detention on March 6th, the subversive became a whistleblower via the “Law of Effective Collaboration”, after which his custody was transferred to a Dircote specialist team that was transferred from Lima to Ayacucho and headed up by Colonel Arquímedes León Velasco.

According to the report, in the town of Huamanga, Pillpa alias “Comrade Johnny” won the trust of the police officers and that the custody of the terrorist was reduced to just a single officer. He was also allowed to go out shopping or have lunch in a restaurant close to the Dircote building.

However, according to police sources Comrade Johnny escaped on April 20th when allowed to go out for lunch. When police realized he had escaped they decided to keep it secret.

Gonas Pillpa Obregón, father of the member of Sendero, said that Dircote personnel came to his house to look for him and when they found nothing, stayed 15 days.

Later, a local of the nearby town of Huanta told police that he could provide information on the whereabouts of Pillpa for U$1,000. However this was not taken seriously by local police because they didn’t know the terrorist had escaped. He then got in contact with officers in the town of Huamanga. Pillpa, who was in charge of recruiting students to the Sendero cause, was officially reported as escaped on April 26th.

You can imagine the same kind of thing at Gitmo, can’t you?

“You want to go out for rice and black beans today? Sure, but be back by four, yeah?”