Chart of the day is 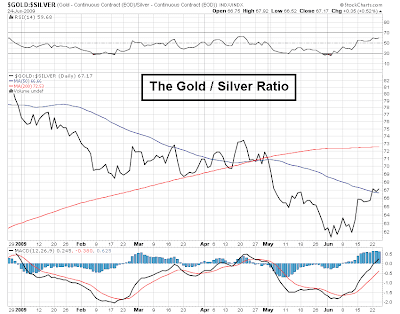 The last time i put up the GSR, a mailer asked me to explain a bit more as to why it’s an interesting chart to follow (for me at least); here we go.

Watching the GSR is a good way of noting fear versus greed…to a certain extent that is. Basically, the more nervous people get, the more they’ll prefer to hold gold over silver. This is because gold is money, gold is the long-standing store of wealth, gold is the safe haven metal etc etc.

And silver is……well, it’s silver. The pretend precious metal. The one that claims brotherhood with gold but is mostly produced as a by-product of base metals (zinc and lead, usually). Neither fish nor fowl, silver maintains a positive beta relationship to gold.

When times are good, silver will appreciate faster than gold as people buy into the precious metals side of the metal. When times are nervy, silver exasperates its fan club (the dreaded silverbugs; people that make goldbugs look normal) and sells off at a faster rate than gold (supposedly due to Goldman Sachs using massive put positions on Comex and despite being the metal about to be used in the new Mexican currency, or the Amero, or whatever other tinfoilhat theory is fashionable).

All this can be summed up in one simple phrase: People trust gold more than silver.

So due to all that, we can use the GSR to gauge market sentiment. Right now the GSR is rising from a recent 62X (one ounce of gold buys 62 ounces of silver) and stands at 67-and-bitsX. However, the 200dma is flat and the 50dma still points lower, so the trend is still downwards.

Mixed signals between the very short term and the short term, then. Further fear will send that line up, more greed will send it down. DYODD