….this, that tracks the correlation between sunspots and economic recessions; 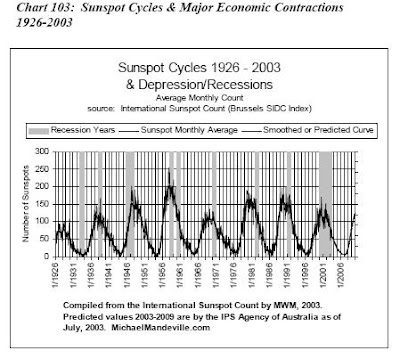 Which I found here and then it led me to this…. 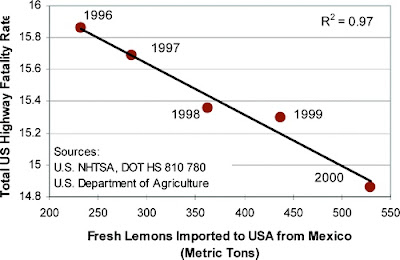 ….which was also great, including this extract from the script:

“..It’s a plot of the US highway fatality rate versus the tonnage of fresh lemons imported from Mexico, and I have to say, it’s a pretty darn straight line. I’ve seen a lot shakier plots used to justify some sweeping conclusions, and if those were justified, well, then I’m forced to conclude that Mexican lemons have improved highway safety a great deal. The vitamin C, maybe? The fragrance? Bioflavanoids?..”

Which leads us on to this:

…..which makes me laugh my wonky laugh and finally gives me a chance to mention that you can get your hands on a free abstract of Taleb’s The Black Swan by clicking this link. Here’s the blurb:

“The Black Swan – The Impact of the Highly Improbable”

Know in 10 minutes what it takes others hours, and keep up with the latest trends in your industry.

In this summary you will learn:

Why you should read The Black Swan. According to critic Harold Bloom, Hamlet’s predicament is not “that he thinks too much” but rather that “he thinks too well,” being ultimately “unable to rest in illusions of any kind.” The same could be said for philosopher, essayist and trader Nassim Nicholas Taleb, who finds something rotten in misguided yet supremely confident investment gurus, traders, hedge fund managers, Wall Street bankers, M.B.A.s, CEOs, Nobel-winning economists and others who claim that they can predict the future and explain the past. Like everyone else, says Taleb, these so-called “experts” fail to appreciate “black swans”: highly consequential but unlikely events that render predictions and standard explanations worse than worthless. Taleb’s style is personal and literary, but his heterodox insights are rigorous (if sometimes jolted by authorial filigree). This combination makes for a thrilling, disturbing, contentious and unforgettable book on chance and randomness. While Taleb offers strong medicine some readers may find too bitter at times, getAbstract prescribes it to anyone who wants a powerful inoculation against gullibility.

Other Resources from: getAbstract