…..the chart for Yamana Gold (AUY), because it didn’t just beat the street last night, it kicked its butt bigtime. This simple 12 month chart surely gives it room to rise, too. 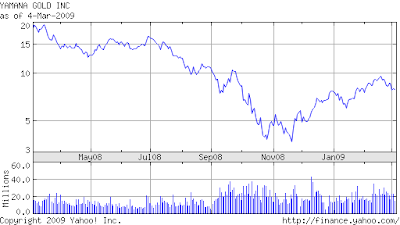 AUY is a funny fish to estimate and gives insto analysts real headaches. They never seem to “get” Yamana, due mainly to its fluctuating financials more than any pleasant or unpleasant surprises on actual production. Over the years it’s also been a frustrating stock to own, which is why I’ve never held it except for short, trading periods (and never made much money on it, for the record…probably a net loser personally).

But yesterday’s really came in well; cash cost was on target, there were no significant write-downs, at the 4q08 eps of $0.25 beat the average consensus of $0.04 into a cocked hat. The company also made clear in its presser that its plans to increase gold (eq) production to 2m oz per year in 2012 are on course. That compares to the 1m oz Au it produces right now and clearly indicates that AUY will be on the acquisition trail soon enough. I still say AUY will buy JAG (been saying it since December), but repeat to stop potential mailers that there’s no inside knowledge happening around that…just my own, personal call that can be shot down in flames at a later date.

So the bottom line is: great quarter at Yamana. I’ve never been a great fan of the stock but credit where it’s due. I enjoy those moments when facts prove me wrong.