Chart of the day is….

…copper (daily candles), which is really on a roll. 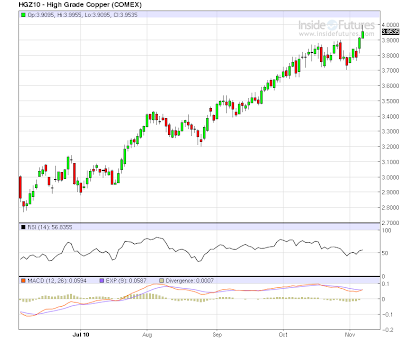 Telling you dudettes and dudes, I’m a happy holder of Antares (ANM.v) all the way through its selling process. The chances of a counterbid aren’t great but do exist, but in the meantime ANM is now proxy paper to FM.to which is on a real run itself.
Meanwhile, I lost a small gentleman’s wager on this news out of Chile last night, as I told a friend who’s smarter than me (his blog is here) that Collahuasi wouldn’t go on strike. It went on strike (though it’s not expected to last long). I like Chile’s unions; not afraid of spreading the wealth.