…..oil again, but this time the hourly candles. 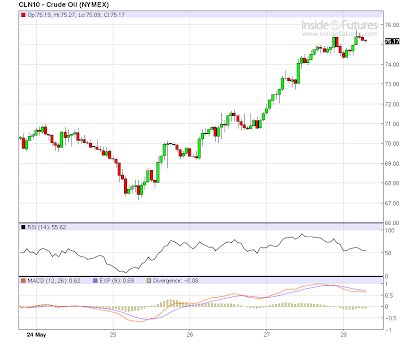 The rally continues, with $75 falling this morning and the ‘Deflation Play’ quickly being forgotten by this fickle world. Meanwhile, featuring oil again this morning gives me a lame excuse to paste up a section from today’s Can of Corn Morning Coffee. I dunno whether to laugh or cry about this, frankly:

PaddyPower.com has placed odds on what species would be first to become extinct as a result of crude belching from BP’s (BP) ruptured well in the Gulf of Mexico. Odds are the Kemp’s Ridley turtle, and other critically endangered species that migrate to the Gulf this time of year, would go first. A $5 bet on the turtle would win $9 if it’s listed as extinct at any time because of the spill. Less likely species – the gulf sturgeon, smalltooth sawfish and elkhorn coral – have payout rates of 20-to-1.

The Irish bookmaker hopes the betting will “highlight the environmental catastrophe” and the “sure bet” that it would lead to the loss of some marine species. “We kind of have a very simple philosophy at Paddy Power – within reason, if there is a very newsworthy event that people are talking about, people should be allowed to back up their opinion with some cash,” a company spokesman said. PaddyPower.com is also taking bets on who will be the next CEO of BP.