…copper, monthlies with a red line drawn on it: 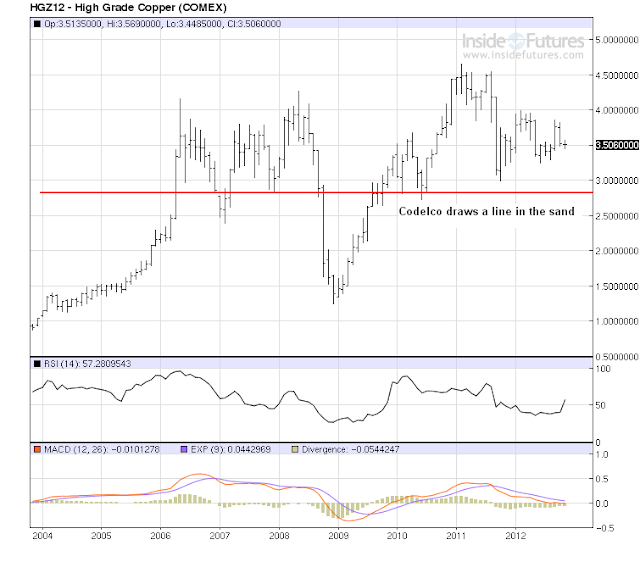 The red line is due to this, comments made by Thomas Keller, main man number one head honcho of Codelco, yesterday and translated here:

Keller justifies mining projects if the price of copper stays above U$2.80/lb
The executive president of Codelco, Thomas Keller, said on Tuesday he considers it necessary that the price of copper maintains at least U$2.80/lb in order to justify long-term mining projects. The executive referred to estimated made by “some analysts” and the consensus, that put the long term copper price in this range as “the necessary equilibrium point to justify long-term projects”.
Keller also referred to warnings from some analysts on oversupply of copper in late 2013 and 2014 and considered that it was “still subject to a lot of uncertainty”, but said it unlikely to produce a “large impact in the price”.
“I think that the relation between supply and demand remains tight, a small surplus is again projected by some analysts towards the end of 2013 and in 2014, but this is subject to a lot of uncertainty and is within margins of error”, said Keller.