…Fortuna Silver (FVI.v) versus SLV (as a proxy for silver), six month chart. 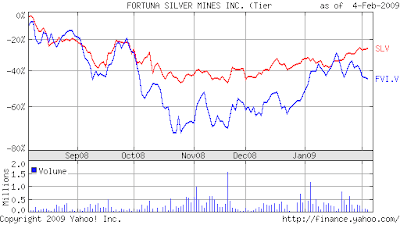 We can see four recent phases of FVI.v on this chart nice and clearly. First, it tracked the metal pretty faithfully. Then it broke away to the downside and went through the same funk as its peers. Then it recovered and got back to the SLV benchmark level. But recently it’s dropped away. I can’t think of a single reason why FVI.v won’t return to the SLV line again. This is how I like my charts; not a dozen squiggly lines open to a dozen-times-dozen interpretations, but a nice simple story to tell (and one that has a trade sitting up and begging for me).

So it seems to me that if you can pick up some $0.83 there’s an obvious 20% ST winner here (at least). With silver sniffing at $13/oz once again, FVI.v offers value at anything under $0.90 for a ST play at least. The CNU.v deal gets wrapped up (at long last) on March 13th and Caylloma is pushing though plenty more silver-rich mineral in FY09. Add the fact that it’s now on people’s radars and volume has been tradeably good recently and we’re off to the races.

Without thinking too much and staring at charts (not very good at that anyway), I’d call the previous top of a touch over $1 as the target. DYODD dude, but I for one will be the buyer of a trading block here as long as the price is right.