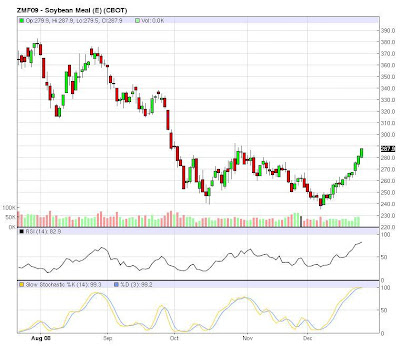 Everso everso quietly, soybean meal (and its other soyfriends, of course) have put together a very interesting end of year rally. We’re now at a point where the mumbo-jumboists will point to resistances lines, overboughtness on RSI and Stochs, etc. Meanwhile normal people will look at the chart, think about dollar weakness, lack of fertilizers used in the first half of the growing season (phosphate and urea prices have dropped considerably in the last few weeks) and the non-record numbers expected by Argentina and Brazil (to name but two) this year.

You’d do well to watch the bean from here; maybe those enormous Chinese apartment blocks are empty, but the people who were about to move in still need to eat food wherever they’re hanging. The last time I looked the world’s population was still growing and the thought of that bubble bursting does not promote thoughts of peace on earth and goodwill to all.