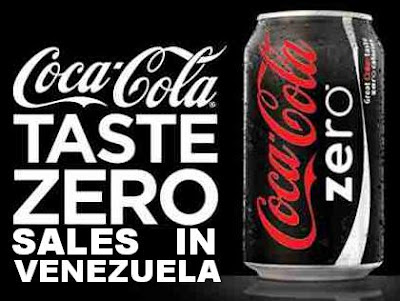 Forget fascist repressions in Peru, ongoing extrajudicial killings in Colombia and thwarted Coups D’Etats in Bolivia, because now THE VERY FABRIC OF MODERN SOCIETY HAS BEEN THREATENED by Hugo Chávez’s ban on the soda “Coke Zero” in Venezuela.

Yesterday Venezuelan HealthMin Jesus Mantilla said that the drink should be withdrawn, saying, “The product should be withdrawn from circulation to preserve the health of Venezuelans.” Details weren’t given, but the suspicion is that Sodium Cyclamate is behind all this.

Apparently, when the Coca-Cola Company first introduced Coke Zero into Latin America a couple of years back they used a different recipe than the one up North, leaving out some of the normal sweeteners approved for use everywhere (like aspartame that costs around $150/kg, if my info is good) and added Sodium Cyclamate instead, which comes in at around $10/kg right now (again, if my info is good on this). The only problem is that Sodium Cyclamate is a banned substance in many parts of the world, including inside the USA, where it has a reputation as a carcinogen and has been off the list of things food manufacturers can put in their stuff since 1970.

When Mexico and Chile (two of the first target markets for Coke Zero in LatAm) found out that Sodium Cyclamate was part of the yummy local recipe there was an awful hoohah until Coca-Cola Company changed the recipe to the one used in the USA. Now I don’t know whether the Venezuelan version does or does not contain Sodium Cyclamate (Coke says it doesn’t), but I’ll bet dollaz to lowcal donutz that sexy little cancer-maker is at the heart of the Venezuelan ban. It only remains to be seen whether Chávez&Co has a valid complaint about local Coke Zero or it’s down to another round of gringobaiting, but according to a quick Google before it went on sale in Venezuela the drink got its clean bill of health from the very same HealthMin that is now banning it.

On the other hand I do know that firearms in Caracas kill far more people than CokeZero ever will and perhaps Hugo should do something more proactive about them instead of farting around with soft drinks. I also know that any serious news service covering LatAm that gives this story more column inches than Peru’s transformation into a murderous police state is a total whore and should be ashamed of itself….just like this blog. And finally, I know that CokeZero tastes crap so it’ll never be a health risk to me either way…I’m sticking to expresso coffee and OJ.