Chile: The pushback against the royalty hike begins (from IKN70) 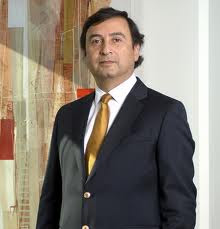 Got a gold tie, have you? Think you’re clever, do you?
In Chile dumbass xenophobia is not confined to the proletariat masses, as what it tries to pass off as its executive also promote soft racism for its own political ends. Today’s example of shameless purveyor of hatred is Miguel Angel Durán (Anglo American should be ashamed of themselves) and the situation was included in yesterday’s IKN70 thusly (as we’ve been following the Chilean royalty law issue over there):

Chile: The pushback against the royalty hike begins
We mentioned above the revised royalty plan now heading to Chile’s congress for passage to law, so it’s worth mentioning here the tactic unveiled this week by the industry to stop this royalty proposal from becoming reality. And the tactic is, “remind Chile just how much they hate Peru”. This crass strategy comes from the mouth of Miguel Angel Durán, head of the Chamber of Mining and also (significantly) Executive President of Anglo American Chile. The thinly veiled attempt to appeal to historical friction and ill-feeling between the Andean neighbours took the guise of competitivity in the copper sector. In his op-ed published in Chilean biz magazine ‘Estrategia’ he wrote (8) that he was ‘worried’ about the growth rates shown by mining in Peru because its costs of production were lower than in Chile. He continued (translated):
“If one looks at the growth rate that copper mining (in Peru) has had in the last few years it has been greater than that of Chile; if one looks at the costs, they are lower.
“Projection made by international organizations reveal that producing a pound of copper is cheaper in Peru than in Chile, that exploration investment is lower in Chile than in other mining countries and that energy costs (for mining in Chile) are higher.”
So after waving the flag and appealing to base nationalistic traits, Durán comes to the point:
“The problem in modifying the royalty impacts the profits of companies operating today in Chile, but will undoubtedly affect future investments. Therefore for the investor who has to decide between countries that have higher taxes than others, or lower exploration costs or higher costs of production, the alternatives are clear.”
This is, of course, total balderdash. The same arguments are trotted out every time a government decides to raise burdens on mining and it makes little or no difference in the longer run, as anyone who can remember the debate in 2004 when Peru’s mining industry was up in arms about its own royalty hike can remember. As for Chile itself, Señor Durán in his discourse neatly avoids the low overall state burden placed on mining by the State, along with the early stage tax breaks offered by the country. Playing the reduced profits card is also a real stretch at a time when Chilean miners produce at U$1.30/lb to $1.70/lb and sell their product at $3.50/lb. Finally, when it comes to the building of new mines, we know that the miner goes to the project rather than vice-versa.

Bottom line: If this is all the top executives can manage by way of an argument against the new, time-limited and watered down royalty proposal to raise money towards the post-quake rebuild, then the project will make passage and become law. Durán does a dissservice to his fellow miners with this shameless jingoism.