Chile’s Presidential race: Getting hotter by the minute 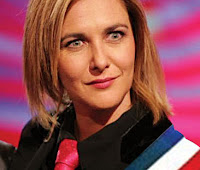 Pamela Jiles is a well-known journalist and TV personality in Chile. She spoke out against Pinochet back when it was dangerous to do so and these days she’s often found on TV chat shows railing against the showbiz gossip circuit, so just those two things get her approval Chez Otto. However, she’s also taken it upon herself to run in this year’s presidential elections as an outside, independent candidate and even though she’s polling very low she managed to get her face on every front page in Chile today with the photoshoot she staged for the cameras.

Dressed in military garb and smoking a far cigar, she posed for the cameras outside Chile’s presidential palace with a blonde topless girl draped around her “suggestively”. Check out one of the shots for yourself at this report in Chile’s La Cuarta or here’s a page with a video of the whole thing (by the way, I made a decision early on not to have nekkid photos on IKN, not cos I’m a prude but cos there are a zillion other interwebnetpipes pages to choose from…so why bother?).

So congrats for making it to IKN, Jiles. Yet another sexed-up presidential candidate hits South America.