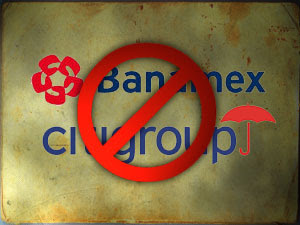 The Mex Files has a post up that notes the Mexican angle to last week’s news about Citigroup giving 36% of itself over to the US Government. RG starts his note by saying that it’s a story you probably won’t get to read North of the Rio Grande.

I beg to differ. I think it might become a very big story indeed.

The nub of the issue revolves around Mexican law, which states in crystalline manner that foreign governments cannot own more than 10% of any bank that operates inside Mexico. It’s as clear as a bell and on the statute. So as Banamex is a wholly owned subsidiary of Citigroup (C paid $12.1Bn or so back in 2001 for the bank) if the US Gov’t takes its 36% stake in Citigroup then it will be a larger-than-10% shareholder of Banamex, something against Mexican law. Won’t it?

Well, maybe yes and maybe no. It was interesting that Citi’s CEO, Vikram “still got a job” Pandit, spent two days down Mexico way earlier this month. He met with the bank honchos of course, but also gov’t lackeys and the regulator dudes too, so we hear. He also made it very plain that Citigroup plans to hold on to Banamex, saying things like the Banamex is Citi and Citi is Banamex and may sacred matrimory reign etc etc. Pandit dixit Feb 20th 2009:

“I want to make it very clear: Citi and Banamex are one and the same……The future of Citi is in emerging markets. It’s in Latin America. It’s in Mexico with Banamex.”

So with last week’s Citigroup/US Gov’t announcement that already has Mexican officialdom and opposition politicos smelling blood, it’s worth noting how Pandit recently split C into two parts, namely Citi Holdings (all the bad stuff) and Citicorp (all the retail banking things that are profitable and everyone likes, including Banamex).

So here’s the question that’s been itching at me all weekend: Do Citigroup’s intentions regarding Banamex signal that the US Gov’t is only (or majority) buying into Citi Holdings, the toxic end of C?

It’s intriguing. It would be an über-underhand move concealed from the market so far and would cause uproar if the news hit. If it is true, then the US taxpayer is getting an even worse deal than s/he thought. In fact, it would likely make Uncle Sam the majority holder in the toxic bank to end all toxic banks. However it does fit the Citigroup line that says Banamex is safe and not in any legal trouble and will stay part of C.

However, if in all likelihood it’s not true and the US gov’t is getting 36% of the whole shebang, Citigroup is undoubtedly breaking Mexican law by holding onto ownership of Banamex. So either Mexico changes the law to suit present circumstances (possible, though it will be an absolute political field day for Calderon’s opposition) or Banamex will have to be sold to a third party, something that Pandit clearly doesn’t want to happen.

Already there are overtures being made by other banks, which isn’t surprising because unlike its lamentable parent company Banamex is a well-managed and highly profitable bank. I’d go as far as to say that Banamex is quite the jewel in the Citigroup crown and as such a prized asset that would be a major loss for both C and Pandit. But sharks are circling all right. For example here’s an AP report noting Brazil’s Itau is interested in the asset.

The price tag being bandied around the market right now is something in the region of U$12Bn to US$15Bn, meaning that Citigroup would most probably walk away with its original investment money (not to mention the eight years of profits generated by the subsidiary). Let’s see how the story develops, but you have to wonder if Banamex is the canary in Pandit’s coalmine. After all the moves and sounds made by Pandit this month any eventual sale of Banamex might become the straw that breaks the camel’s back* and sees him “being resigned”.

Appendix: A few stats about Banamex as culled from the C website. This gives you an idea as to why Pandit wants to keep a tight hold.

“Yesterday’s Jornada quoted the Sec. of Treasury for the cabinet of “presidente legitimo¨ Andres Manuel Lopez Obrador (yup, he’s still around) as pointing out that legally, this would allow Mexico to nationalize Banamex outright. Gonna be fun to watch.”

* metaphor mixing is a sacred right of the blogger