The lady Clinton is today at the OAS conference in Lima, where she’ll stick up for her bff Lobo, try to get his country back in the club and neatly ignore all the human rights abuses that have been going on recently (what number are we up to now? I think it’s 10 reporters murdered in Honduras since he took over). So once she’s done listening to the commie creeps and getting the Honduras veto in her face once again, she’ll split for Ecuador where Studmuffin will make eyes at her, then off to Colombia for time with both mockus and Santos as well as fond farewells to the NastyBrutishShort one.

Meanwhile, the gentleman Clinton is in Argentina today raising funds for the Clinton coffers by giving one of those keynote speeches and then one of those clubby-type intimate gatherings he does for serious moolah in a hotel in Puerto Madero, Buenos Aires. We’d expect him to …ahem….enjoy the varied nightlife of BsAs in the same style as last time he hit town too. That was in June last year when he checked out Cocodrilo, usually named as a ‘gentleman’s nightclub’ by the press but in fact (and folks, you’re reading an eyewitness to the place who went in his bachelor days) it’s a whorehouse. On his last visit, Clinton spend the evening there and was entertained by a $1,000 pole dancer (she gets that price for being a minor celebrity, as she was once an Argy Big Brother contender) who told the yellow rags afterwards that Slick Willie “wanted more”.

So there you go; Hillary in Lima and Bill in Buenos Aires. Which one is the more newsworthy? YOU BE THE JUDGE!

UPDATE: On this link find a bunch of 16 photos from last night’s reception held for Bill’s sake in BsAs. It’s a measure of the pulling power of the Clinton dude that this photo exists….. 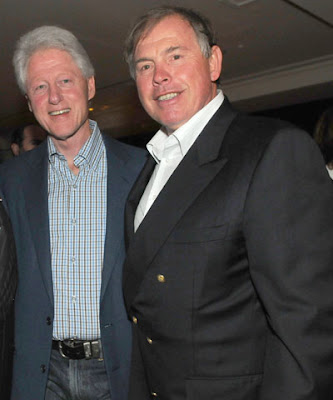 …..as the guy with Bill is Gerardo Werthein, head of the very powerful ‘W’ Group (the Werthein family biz, amongst other things big part owner of Telecom Argentina) and a notoriously camera shy person (he has this kidnapping paranoia, apparently). Also seen in other photos are his father and brother posing with Bill, plenty of local politico bigwigs and the stock standard shots of Bill gawking at women’s breasts. Go check it out.