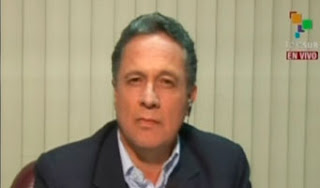 Rodolfo Muñoz
Amazingly, you haven’t been fed this story up there in the homogenized, filtered world of EngLang news, have you? It turns out that the CNN journalist on site at the September 30th attempted coup in Ecuador has resigned from the company due to the way in which that news channel reported his story.
Here follows a full translation of this Spanish language report on the resignation of Rodolfo Muñoz (it has to be translated, because there aren’t any EngLang reporters in LatAm that think this newsworthy… strange that innit?). IKN thanks the legwork of reader ‘MR’ on the translation, which is a good one. Read on and find out that even the people reporting what happened on September 30th in Quito, Ecuador disagree with the editorial line of the TV channels that tried to make out it was some sort of non-event. Or in other words: Yes, you’re being lied to. Get used to it.
CNN’s Version on the Ecuador Coup Provokes Resignation of its Reporter

The Ecuadoran journalist stated that he decided to resign from CNN that very Sept. 30 because the US TV channel’s viewpoint on the circumstances that day in his country differed from what he observed as he covered the events which pointed to the fact that a coup d’etat was taking place. Muñoz also noted that there is evidence that killing President Rafael Correa was a goal.
The former CNN correspondent in Ecuador, Rodolfo Muñoz, explained on Tuesday that his resignation from the US news channel was due to the viewpoint that it had on the attempted coup d’etat in his country, which differed from what he observed as he covered the events.
“That same night on Sept. 30 I determined that it was no longer in my interest to continue doing that sort of work, a distinct slant from what was happening in my country; in the end I found that the option was gone, the conflicting viewpoints is what changed without a doubt and that’s where it ended,” the reporter said to the press in his country about his resignation from CNN, after covering the attempted coup d’etat in Ecuador.
In a press release that Muñoz put out on Tuesday announcing his decision,the journalist affirmed that the role of a reporter is that of mediator and not that of agent or protagonist in the events.

“Throughout my career, I learned and taught that the reporter’s role in any news event, be it simple or complex, is only that of mediator, not that of agent or protagonist. I learned that we mediators cannot await newsworthy outcomes according to our own particular desires, preferences, phobias and prejudices.

He added that the information that communicators transmit, in particular that to audiences in other countries, must allow for the possibility of two different views of the events.
“I always knew that all information, especially if it is directed to a foreign audience, one that does not know the particularities of a country other than their own, should be shown at the very least from two distinct perspectives “, he expressed in the statement.

They Wanted to Kill Correa

During an interview given to teleSUR on Tuesday, the Ecuadoran journalist reiterated that there is proof that they intended to kill President Correa during the putsch on Sept. 30.

”A ton of ‘broadsheets’ showed up on the internet (…) above all a version which circulated worried me (…)  some in the media were stating that nothing had happened (…) there is proof that they wanted to kill the president”, he asserted.

A group of police seized by force last Sept. 30 the First Regiment in Quito in protest, supposedly, against the refusal to veto the Public Service Act which proposes eliminating bonuses and promotions that are paid out in yearly salaries.

Ecuador’s president, Rafael Correa, was in the insurgency’s focal point to attempt dialogue, but was obliged to withdraw on account of the violent actions which were taking place in the area.

In the face of this, Correa denounced the fact that the violent police protests occurring in Quito formed part of an attempt at a coup d’etat which had been in preparation for months on the part of the opposition and had called on the police force that serves the country to revolt.

During the coup attempt, the Ecuadoran president remained for 12 hours held involuntarily in the police hospital where later he was rescued in a joint operation of the military and units from the Special Operations Group of the police.
After the attempt, some recordings from the central police radio dispatch revealed that rebelling agents were inciting the killing of the leader and were affirming that they would not allow him to leave the hospital, where he had sought safety after being attacked, as long as he refused to repeal the law.

After the events, the Ecuadoran leader in various occasions has declared that they tried to assassinate him during the putsch to overthrow him.

“We were able to make it to the emergency in an armoured car. When we set out in the car and we began to leave, a shower of bullets hit the President’s car, seeking to kill the President”, Correa stated to teleSUR about the moment in which he was rescued from the health center.