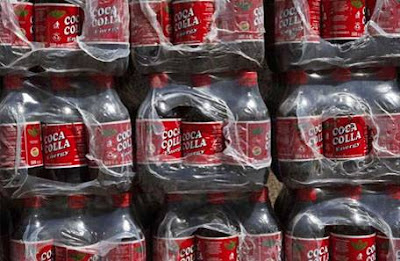 Back in December 2009, this humble corner of cyberspace covered the story of Coca Colla, Bolivia’s fizzy drink that has coca leaves as one of its main ingredients and the country’s homegrown answer to TheRealThing.

So the burning question on everybody’s lips today must be, “Hey Otto, how’s that Coca Colla doing in the marketplace, dude?”. Yessiree a very good question, so let’s hand over to Iguazu Noticias for details (translated):

The product, made with coca leaves as a main ingredient, is distributed in half litre plastic bottles at a unit cost of 10 Bolivianos (U$1.40) and is produced and marketed by a private company connected with coca producers. The drink is made with coca extract with carbonated water, sugar, caffeine, natural flavourings, authorizaed colours and preservatives.

According to Víctor Ledezma Fuentes, director of Coca Colla, current production at the bottling plant in Santa Cruz, 1,000km South-East of La Paz, is two thousand half litre bottles per day and is distributed to markets in La Paz, Cochabamba and Santa Cruz.

The production company is owned by the Social Organization for the Industrialization of Coca (Organización Social para la industrialización de la Coca), made up of some 9,000 coca farmers in the Chapare region of Bolivia in the department of Cochabamba and the Yungas region in subtropical La Paz.

The company plans to install a second bottling plant with capacity to produce 8,000 bottles per day as “There are orders from all over the world“, according to Ledezma.

At the moment, Coca Cola and Pepsi Cola are under State investigation due to exclusivity contracts signed with commercial outlets and risk losing their operation licences.

The result: Coca Colla, having just last week seen its official unveiling as a commercial product, seems to be a big hit with plans to bump production up from 2k to 10k bottles per day. I’ll drink to that. 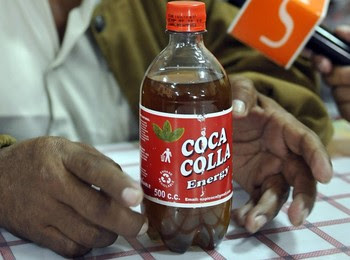