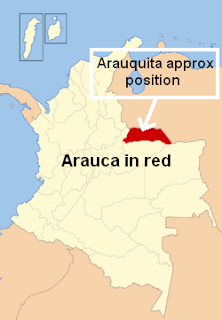 Some people are predicting the end of Uribe due to the ever-unravelling pyramid scheme crisis in the country. Me? I don’t care much. But I really, really care about stories like this one that Scott Nicholson has just dispatched from the state of Arauca in eastern Colombia:

My friend Carlos Cabrera was killed in Arauquita on November 28. He was forcibly removed from his home, taken to the outskirts of town, and then shot and killed. He was the secretary general of the Arauquita Displaced Persons Association, which represents people who have been forced to flee from their homes because of the violence. He had a spouse and two young daughters, and it appears that he was killed by ELN guerrillas.

If you do continue reading (and I hope you do) you’ll find out that things are not good at all in Arauca, and the two ultra-left terrorist groups FARC and ELN are fighting amongst themselves in an ongoing local rivalry. You’ll also get to read the remarkable conversation Nicholson had with one of Cabrera’s daughters.