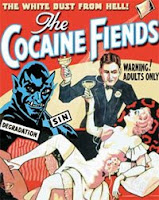 (yes I know I’ve used this one before…still like it though)
Colombian coca cultivation dropped 27% in the period 2007-2008, according to a UN report being trumpeted everywhere (and normally pretty reliable). Also, cocaine prodution is reported down 28% in the same period. Meanwhile, Bolivia (up 6%) would be getting a tremedous amount of stick from knownothings if it weren’t for the 4.5% rise in Peruvian coca production. The Colombia number is to be applauded for sure. Interestingly the combo of lower farm gate prices for the leaf (good old Adam Smith) and the increased use of hand eradication are the two reasons cited by the UN for the significant drop in Colombia. So after all this time of dropping tonne after tonne of glysophate on the Colombian jungle from the sky, the “let’s rip up the plants by hand” thind that smarter experts wanted them to do for years has actually worked. Better late than never, I suppose.

There is talk from the same UN people that 2008 planting is up, due to the collapse of that pyramid scheme which has left many rural dwellers without means of support, but let’s not subtract too much from Colombia’s moment of glory. The numbers reported by the UN are wholly good.

Uribe might not get his chance at a third term after all, as Colombian lawmakers postponed the passing of the necessary bill. With 11 months and counting to election day it’s now a 50/50 thing that Uribe gets on the ballot.

Colombia’s economy has still got the shakes. The central bank dropped its benchmark lending rate to 4.5% this week to try and stimulate things a bit. The official GDP forecast still stands positive (at +0.5%) but people who live in the real world are in no doubt about the negative end result due for 2009. As there’s not much inflation in the pipeline (econ 101) there’s little danger of countrywide price rises, so even if (as it seems to me) the CenBank is pushing on a string here there won’t be any harm done.