Colombia: The Importance of Being Earnestly Idiotic 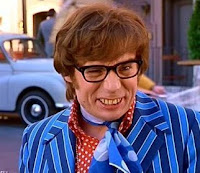 Jack: I don’t actually know who I am by birth. I was… well, I was found.
Lady Bracknell: Found?
Jack: Yes. The late Mr. Thomas Cardew, an old gentlemen of a kindly disposition found me and gave me the name of Worthing because he happened to have a first class ticket to Worthing at the time. Worthing is a place in Sussex. It’s a seaside resort.
Lady Bracknell: And where did this charitable gentlemen with the first class ticket to the seaside resort find you?
Jack: In a handbag.
Lady Bracknell: A handbag?
The Importance of Being Earnest, Oscar Wilde, 1895

Just to show that the age of total inept Austin Powers dumbassery is alive and well in the British Secret Service, let’s all shout “Yeah Baby!” at how an agent recently jeopardized very large anti-narcos operation by leaving a memory stick with names and details of all concerned in a handbag on a bus in Colombia. The UK Times has the story:

In a blunder that has cost taxpayers millions of pounds and put scores of lives at risk, the drugs liaison officer lost a computer memory stick said to contain a list of undercover agents’ names and details of more than five years of intelligence work.

It happened when the MI6-trained agent left her handbag on a transit coach at El Dorado airport in Bogota, Colombia. Intelligence chiefs were forced to wind up operations and relocate dozens of agents and informants amid fears the device could fall into the hands of drugs barons.

Here’s an extract from another report on the ballsup

“A source claims the memory stick contained details of anti-narcotics intelligence compiled over more than five years. The loss risked the lives of undercover agents and informants who have now had to be relocated. He said the total cost of aborted operations was £100m…”