Colombia: Uribe taught them all they know 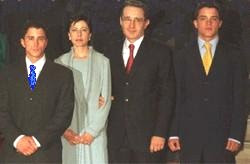 Stallion, Distaff, Colts
How are those cries of “dictator-prez-for-life!” coming on about Alvaro Uribe in your media of choice up there? Would corrupt family business deals help tip the balance, perchance? It would have been easy for you guys up there to miss this story, as the only English language report to be found IN THE WHOLE, WIDE WORLD is this one from the recommended Colombia Reports. Isn’t it strange how the English-speaking media has completely ignored this big story getting wide coverage in Colombia? Nothing in the WaPo, the Miami Herald, CNN or Pajamas TV with Joe the Plumber. Not even in the “all that’s fit to print” New York Times, though considering the NYT’s representative down here is more interested in FruityRumPunch and PunchingRumFruities than actually doing any reporting, the lack of NYT coverage isn’t that surprising. But I digress.

“What story, Otto?” I hear you cry. Pretty simple really. Two young whippersnappers by the names of Tomás and Jerónimo bought a nice tract of rural land on the cheap in 2006. Then suddenly, the land got re-evaluated by Colombian gov’t people and shot up in value because it was deemed the new spot for a tax-free industrial zone project. The original price was 33 million pesos, but after two high ranking gov’t officials that needed clearance from the President himself to announce the deal had finished, the land was suddenly valued at 3 Billion Pesos (that’s around U$1.3m), a near 100-fold rise in two years.

Nice work if you can get it, of course, but getting that kind of work needs connections. And it just so happens that Tomás and Jerónimo are the two sons of President Alvaro Uribe. Strange that, innit? 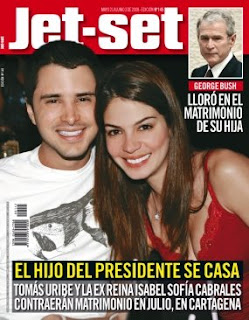 I kid you not, folks. There really is a magazine in Colombia called “Jet-Set”.
Front cover from last year featuring Tomás and bride-to-be (thin, pretty)
In fact, as the original report linked here and from Semana magazine points out at the end of the article, these two Uribe boys have been mightily lucky in business since setting up their real estate vehicle company “Ecoeficiencia” in 2003. Back then the company net worth was 10m Pesos (U$4,400 at today’s exchange rate). After doing ‘a bit o dis an’ a bit o dat‘ for six years, the company already boasts 1Bn Pesos (U$440,000) just in paid-up capital.

Well, corrupt land deals are better than being a politician named by US intelligence as a narco and close friend of Pablo Escobar, I suppose…….