Well riddle me ree, it’s turned out just the way we posted back last Wednesday August 11th (remember where you heard it first dudettes and dudes). Here’s AFP with the spiel:
US-Colombia base deal unconstitutional: court

BOGOTA — Colombia’s constitutional court declared a US-Colombian accord that gave the US military access to at least seven Colombian bases to be unconstitutional.

The court ordered the government to submit the agreement to the Colombian Congress, arguing that it should be executed in the form of an international treaty that would be subject to congressional approval in order to comply with constitutional norms. CONTINUES HERE

And just a couple of minutes ago the Colombian government issued a statement saying it would abide by the court’s ruling. So today gives your humble scribe a chance to repeat that little picture and caption from the follow-up post of last Thursday.…cos it makes me chortle in that cynicalchortle way: 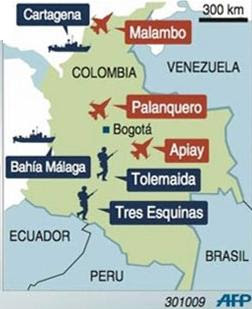 Now is it just me, or perhaps it’s just lucky typesetting, but do you think all them there boats, planes and armed soldiers are pointing in the same direction out of sheer coincidence too?