Here are a series of five charts (click on any of them to enlarge if needed) which give food for thought in the copper sector and, in my personal view at least, give plenty of reason to like Freeport McMoRan (FCX) right now. The first chart is the share price evolution of Southern Copper (PCU) . As anyone who follows the sector knows, the price has been beaten to merry hell. 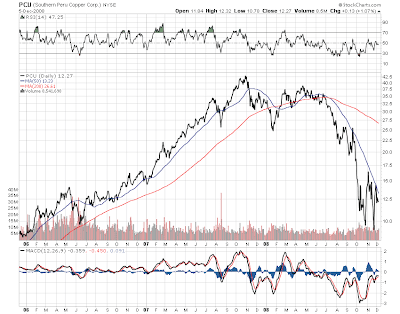 But if we look at PCU in ratio with the price of copper (in US cents), we can see the effect that lower spot prices have had on the stock. 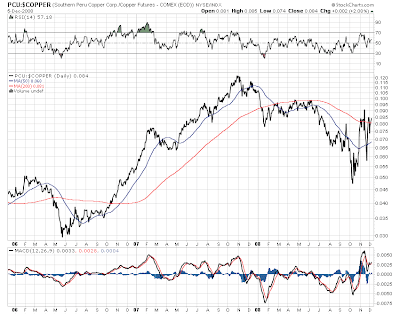 But before we launch into an analysis, let’s look at the second pair of charts. The charts below do the same for Freeport McMoRan, first with the straight stock price and second the equal ratio to spot copper. 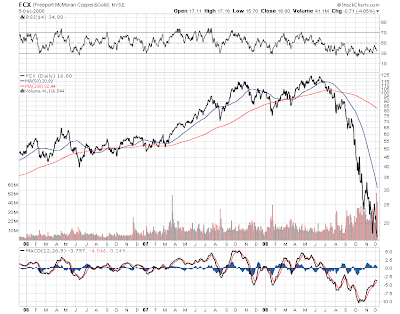 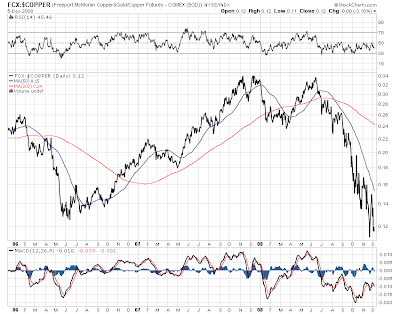 That’s a big difference. For one reason or another, PCU has held up much better against the drop than FCX. To drive the point home here’s the last chart that ratios FCX to PCU: 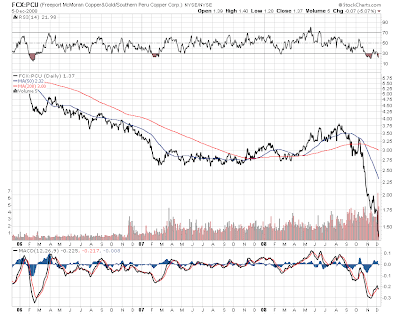 For nigh on two years, PCU and FCX have (in general terms) stayed lockstep with each other, but that’s not true any more. Even though PCU has been hit hard by the downturn, FCX has been hit harder still. There are plenty of reasons to point to here, for example;
But the big question is; which is the better bet right now? I have to say that although FCX is likely to take a $1bn hit on operating cash flow in 4q08 compared to 3q08 and is carrying $7.2Bn in debt (slightly offset by $1.2Bn in cash), it has been oversold and looks like great value to rebound from here. Here’s another list:
So without going into the numerical details in any great extent in this post (DYODD, dude. Maybe starting with FCX’s 3q08 results PR might be a good idea though), this humble scribe sees plenty to like about FCX at these prices. It’s obvious that the company won’t continue making the kind of money it’s made recently, but it’s being priced as a chapter 11 candidate right now and that’s most certainly not the case. So the advice is the same as the post earlier in the week; wait a couple of days until the stock has settled down a bit (there are still lemmings puking, I’d wager) and look for a nice price once it and spot copper look more stable. As a final thought, for those who like to hedge investments the “long FCX short PCU” pair trade looks like the right sort of set up from here.