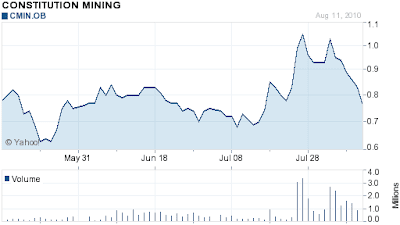 It’s been a few weeks since we checked out the game of stone soup known as Constitution Mining (CMIN.ob), but the news today from the company is somewhat hopeful, so here’s an update. Not hopeful for the company itself, mind you. What this humble scribe refers to is that by the looks of things, CMIN is running out of suckers to scam. Here’s why:
We know that CMIN is woefully short of cash. It’s taken on short-term bridge loans that it needs to pay off quickly and it needs to raise the cash to close on its silly deal with the equally silly Seabridge Gold (SA). This not even mentioning the stupidity of its Marañon river “gold sands” malarkey. With working capital still heavily negative it’s going to be fun to watch how long Michael Stocker can keep this shell game running. DYODD, dude.