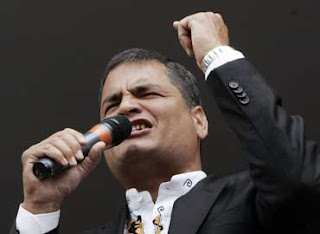 “NOW! I SAID NOW BITCHES! I’VE STOPPED MINING IN ECUADOR FOR TWO WHOLE
YEARS AND NOW WE CANNOT WAIT UNTIL THURSDAY COS I SAY SO”
On Saturday, during his weekly radio address (this time while sitting in Cuba) Studmuffin said that he wanted the new mining law approved as soon as possible.

Thus kingy speaks and his minions listen. Word was that Congress had slated in Thursday 15th….early Saturday Congress head Fernando Cordero was quoted as saying Wednesday 14th. but now suddenly the debate for the second reading is happening Monday 12th January at 2pm.

My thanks once again to regular reader DMMwatcher who does a far better job of noting what’s going down at the Ecuador congress website than I do and is kind enough to send his discoveries over. Hat tip to you.