Dear reader, cast your mind back to November 9th, the day Crapstone Mining (CS.to) announced it had hedged a large chunk of its production for the next year and a bit:

VANCOUVER, Nov. 9, 2016 /PRNewswire/ – Capstone Mining Corp. (“Capstone”) (CS.TO)
today announced that it has entered into zero-cost collars for 43,000
tonnes of copper with settlements between January and December 2017 at a
minimum of US$5,025 and a maximum of US$5,585 per tonne of copper.
There was no cost to Capstone to put this protection in place.

Oh how we laughed when Darren ‘drop the’ Pylot told us there was no cost, it was protection, it was zero cost. In IKN’s words that day...

“…those of you wondering why all the gross profits have suddenly disappeared from the CS.to 1q17 and 2q17 results will receive a sharp lesson in just how “zero cost” this all is.”

…and on fact we didn’t even have to wait until the 2017 numbers showed up, the effect was felt in the 4q16 numbers. So with the 1q17 financials posted tonight and two quarters booked since this executive decision was enacted, we can check on just how much the device is hurting the company. We do that via checking on the “gain/loss on derivatives” line item in the P+L and here’s a chart on that: 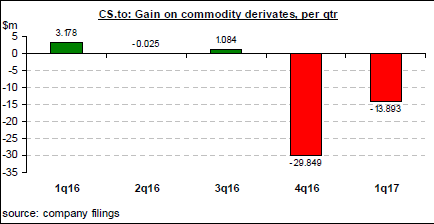 Before Darren Pylot put his “costless” collar hedge on copper production in place, CS.to reaped a small dividend on other minor instruments. But with the hedge in place, as soon as the price of copper busted out of the upper end of the range (around U$2.54/lb) it caused and is still causing Crapstone significant financial losses, a total booked of $43.742m in just two quarters. And be clear, these are not fictitious, accountancy, non-cash losses. These are real cash losses and they literally involve writing cheques to the counterparty, cash that would otherwise have made it to the company treasury.
In short, the reason CS.to has files a 1q17 operating profit of $16.759m but a net loss of $7.395m and the reason its cash treasury position dropped by nearly $19m in this first quarter is due to the blithering idiots pretending to be intelligent executives making dumbass decisions as they fail to run this joke of a copper producer. The end.