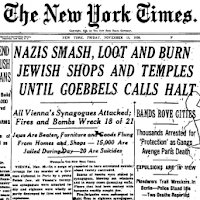 From the days when reporters made sense
In Venezuela tonight, the HQ building of opposition party ‘Accion Democratica’ was attacked by a grenade with some material damage reported. You’d never believe there was a key national referendum vote just a few days away, would you?

Meanwhile, 11 of the people that attacked a synagogue in Caracas last week and handily left a video of themselves on site have been arrested. The merry troupe includes seven police officers. By the way, after reading that Reuters note linked that finishes off on this flourish…..

“…Despite the government’s assurances, some Chavez supporters are openly anti-Semitic and graffiti has become a common sight on Caracas’ streets since the Israel’s offensive in Gaza, which killed nearly 1,300 people.”

…..this post from Borev today is well worth a visit. In it, we get our memory jogged about how the USA managed to use lapdog media to promote BS about anti-semitism in 1980’s Central America….y’know, just before all the invasions and Contra and death squads and related pleasantries. A big bone goes as reward to Reuters’ Frank Jack Daniel. Sit, boy!