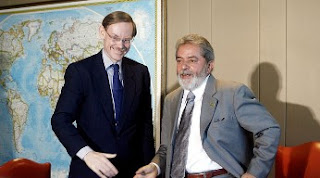 I am the operator of my pocket calculator

Robert ‘Kraftwerk’ Zoellick threw a spanner in the works this morning. Here’s Reuters:

LONDON, Nov 8 (Reuters) – Leading economies should consider adopting a modified global gold standard to guide currency rates, World Bank president Robert Zoellick said on Monday in a surprise proposal before a potentially acrimonious G20 summit.
Writing in the Financial Times, Zoellick called for a “Bretton Woods II” system of floating currencies as a successor to the Bretton Woods fixed-exchange rate regime that broke down in the early 1970s.
The former U.S. trade representative, who served in several Republican administrations, said such a move “is likely to need to involve the dollar, the euro, the yen, the pound and (a yuan) that moves towards internationalisation and then an open capital account.
“The system should also consider employing gold as an international reference point of market expectations about inflation, deflation and future currency values,” he added.

UPDATE: Sharp reaction from The Economist via its Free Exchange blog:

“…Mr Zoellick must know now if he didn’t already; mentioning gold is a good way to get attention, albeit at the cost of having most of your substantive points ignored.”