From last weekend and by popular demand, a re-post. The main reason I’m running this script again is to make the Canadian sellside boothboys green with envy. Sic transit gloria mundi muthafkkaz.
xxxxxxxxxxxxxxxxxxxxxxxxxxxxxxxxxxxxxxxxxxxxxxxxxxxxxxxxxxxxxxxxxxxxxxxxxxxx
Thanks
to reader MB for the heads up on this, the disclosure section of the
latest promotional pump bullshit from Daniel Ameduri and his pumphouse,
Future Money Trends. You’ll find it in tiny tiny lettering in light blue
ink at the bottom, but when you take a good look at the contents it’s
pretty impressive stuff.
To
give you an idea, just the cash dollars add up to U$1.467m, that’s
aside from the warrants, options, shares and other derivatives. Here are
some of the highlights on the cash he makes from promoting these
worthless pieces of crap to idiot greenhorns:

We own shares on both the public market
and via warrants received through private placements in First Mining Finance,
First Majestic Silver, K92 Mining, Golden Arrow Resources, MX Gold Corp., and
Brazil Resources.

Gold Standard Media (GSM) is currently
marketing Brazil Resources, GSM is a media company with the same members as
FMT. We have received up to one hundred thousand dollars for our current
program paid for by the company.

GSM is currently marketing K92
Mining,  we have received two hundred thousand dollars for our current
program paid for by the company.

GSM is currently marketing First Mining
Finance  we have received one hundred and sixty thousand dollars for our
current program paid for by the company.

FMT and its management may benefit from
any increase in the share price of the profiled companies and hold the right to
sell the shares bought at any given time including shortly after the release of
the companies profile. When it comes to buying or selling shares.
Please assume we are buying and/or selling before, during and/or after
publication of the discussed Company.  FMT will not advise as to when it
decides to buy or sell and does not and will not offer any opinion as to when
others should sell; each investor must make that decision based on his or her
judgment of the market.

But to give Ameduri credit, he saves the best line until right at the very end of his mailer.

“Never base any decision off of our website or emails.”

On that I can only agree.

UPDATE: Reader C sends in some visual commentary on the contents of this post: 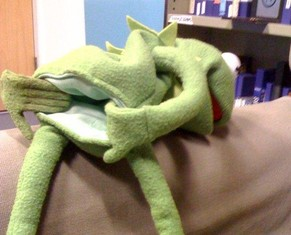