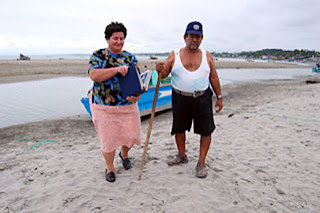 Today’s slice of LatAm Wonderful comes from Ecuador and is translated from this report. Enjoy.

Ramón Moreira died of a stroke aged 72. According to family members, his funeral was attended by at least 52 of the 96 children that, during his life, he said that he had procreated with at least 49 women.

In La Chorrea, a small fishing village in the coastal tourist province of Manabí in (western Ecuador), lived “Don Ramón Gonzalo” who attracted the attention of locals and foreigners alike due to his almost unique history.

He was proud to live up to the Manabian male’s reputation of “brave, macho and machetero (machete-wielding)” for having seduced at least 150 women. “I was dangerous. A good fish head’s soup, plenty of shellfish, the sea breeze and I was ready to go,” he told this reporter during a recent interview. He said that his first two children were born in Medellín more than 53 years ago and since then assured that another 48 women had had children by him. “I was born with the gift of seducing women, it’s not my fault”, he said, with an expression of mischief and nostalgia.

In his time he was a seaman, truck driver, contrabandist of fuel and oil, salesman, fisherman and in his final years the owner of a small hotel and beach restaurant along with his partner of the last 26 years, Katiuska Argote. With her he had seven children: Priscila, María Katiuska, David, Daniel, Dante, Estefanía and Evelyn. “This old man only gave me respite during the 40 day post-natal period and the next day he was trying for a new baby,” said his partner, who also had to put up with him having children with other women at the same time. She remembered that her third child David was born on March 8th and 10 o’clock at night and five hours later, in the same town, another woman gave birth to Frank who was also a child by “Don Ramón”. “He was very attractive an gallant and never lied to me. When I met him I was 20 years old and I fell in love with him to such an extent that I eloped with him. He never lied to me, he said that he had 50 children and I didn’t believe him, but it was true and afterward he kept on having children with me and with other women,” said Katiuska.

Don Ramón, despite his poor health having suffered from ulcers, a stroke and a heart attack, remembered the names of many of his women. “I had ten Marianas in my life” he commented while trying to list the names of the women who had given birth to Gonzalo and Hernán Moreira Díaz who lived in Colombia, to Gerardo and his brother ‘El Chiringo’ who were clothing salesmen in Panam, to Onías who lived in Italy and to another 10 Gonzalos in his native Manabí.

Katiuska, partner of Ramón Moreira, had the dream of reuniting all his children. In 2005 she managed to get the names of at least 50 of them and said she had reunited 42 of them at their house. “They were all married and on doing the count, Ramón’s grandchildren may have already been 200,” she said.

An album of yellowed photos was treasured by Ramón, who showed them off proudly between tears and regret for not having known all the children he said he’d brought to the planet. “I have no regrets, these things are destiny and I never wanted to hurt anyone. Everything I did was with love”, he said nostalgically.