December 1st will be a good day for South America…. 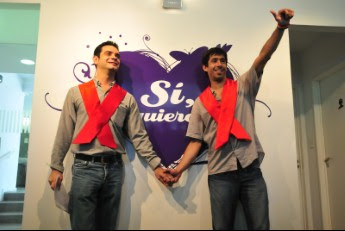 José and Alex: you go boys
…..because the continent’s first ever homosexual marriage will take place.

The couple, José María De Bello and Alex Freyre, got their appointment confirmed at a registry office in Buenos Aires, Argentina today. They chose December 1st (with a little help from the authorities in question) for the following reason (let’s allow José Maria explain):

“We’re happy because we now have a set date to marry on World HIV-AIDS day, a date that is part of our militancy against discrimination that not only attacks sexual diversity but also those who have HIV/AIDS.”

The couple got the chance to marry when last week the Argentine courtrooms overturned the (until then) existing laws banning homosexual marriages as inconstitutional (and Buenos Aires City Mayor Macri didn’t appeal the decision, thank the stars), so mark Tuesday December 1st 2009 as a date when LatAm takes another solid step towards social maturity.