Denial: Not a river in Africa 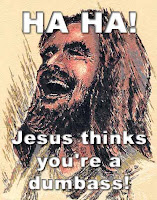 This could be the funniest lead-in paragraph I’ve read this year. From this report in Mercopress (with h/t to borev):

Colombian President Alvaro Uribe said that whether he is re-elected for a third running mandate is “in God’s hands”, but he does not want future generations to think that he was attached to power, reported Bogotá’s newspaper El Espectador.

Ok, the God thing is always shuffled to the top of the deck by politicos of all shades and flavours…but not attached to power? I laughed and laughed. And then laughed some more. The guy has forced through not one but two freakin’ constitutional amendments to hang on to his job!
For sure the same thing can be said of Hugo next door, but that doesn’t change the power-madness shown by Uribe over the years. You gotta wonder about the dude’s psychological stability when he comes out with balderdash like this.