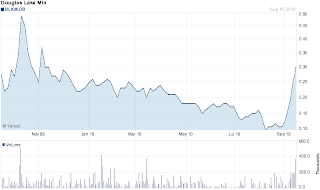 The latest Stockhouse advertisement revenue campaign has kicked off! And guess what? Yup, it’s crap! Here’s how the latest issue of “The Short Report” , Stockhouse’s effort that’s (supposedly at least…or at least marketed as such) gonna help clean up them there mean streets sustarts:

Having racked up accumulated losses of $30 million in the last six years, Douglas Lake Minerals Inc.OTC:BB: DLKM, Stock Forum) does not have much to show for money spent on its exploration properties in Tanzania, East Africa. (

Since January 2004, the company has incurred $19.5 million in mineral property costs and $7.5 million in consulting expenses.
But that hasn’t prevented the shares from almost tripling in value in the last few weeks from 10 cents in mid August. On Wednesday, after a bout of profit taking, the stock was trading at 29 cents, down from 34 cents on September 9.
At current levels, Douglas Lake has a market cap of $21.3 million based on the 72.3 million shares that were outstanding on August 12.
That seems high for a company that is engaged in risky, early stage mineral exploration and has generated no operating revenue since its inception. The company posted a net loss of $2 million or 3 cents a share in the year ended May 31, 2010 — when it had zero cash –, compared to a loss of $4.7 million or 8 cents in the same period last year.
On August 23, Douglas Lake issued six million restricted common shares, (upon the cashless exercise of stock options) at an exercise price of $0.05 per share, according to documents filed with the U.S. Securities and Exchange Commission.
The shares were issued outside the United States to four non-U.S. persons who have not been named.
Douglas Lake is headed by Surrey, B.C.-based chief executive officer Harp Sangha, who could not be reached for comment on this story.
Sangha is a 46-year-old yada yada continues here

What a waste of time. A freakin two bit OTC that popped after six months of farting around gets the attention of the almighty Stockhouse? Jeesh, its is the kind of company that even your humble scribe and his ratty corner of cyberspace shrugs his shoulders at and says “yeah, scammy…big deal…obvious though” and never says a word.
If it isn’t clear to you by now that all Stockhouse is doing is trying to drum up advertising revenues from the hundreds of scammy juniors out there (i.e. you think it likely that a SH sponsor gets featured on “Short Report?”…you think it might be a good idea for the scammy juniors to run a small advert box as of today?) then I have a bridge that you may in interested in purchasing. Easy financing terms, too.
Stockhouse is just a big a scam as DLKM.ob, folks. The lack of useful information and inane crap served up as insight is why I stopped visiting stockhouse and other bullboards years ago.