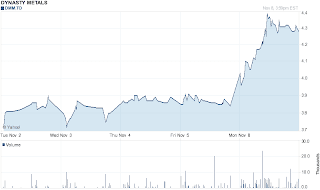 If you were a subscriber you would have known yesterday (Sunday 7th) why DMM made a decent move today (Monday 8th). First they read this:

Dynasty Metals & Mining (DMM.to): Is the long wait nearly over? Modestly optimistic news came out of Ecuador Friday evening, which we examine in detail in ‘Regional Politics’ below.

And then in the ‘Regional Politics’ section of the weekly, 1,018 of the 14,000 words contained in IKN79 were devoted to the subject. The only thing missing is the small chart that’s also available on link 15.

DYODD, dude. I’m also happy to report that at least two subscribers (maybe more, I only have evidence from two people mailing in) took advantage of those $4.00 prices at the opening bell.