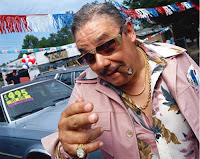 Miracle of investor relations! The wonderful miners but marketing dunderheads at Dynasty Metals (DMM.to) have realized that speaking to your shareholder base, telling them what’s going on and reassuring them that everything is fine is a good idea.

Dynasty is a great mining company with an operation at Zaruma that will be a licence to print money when it’s in full flow. So can anyone tell me why good miners always seem to be bad company promoters, and why bad mining companies often run such slick and professional IR operations? Why can’t the good ‘uns like DMM.to learn a bit from the bad ‘uns on this score?

VANCOUVER, BRITISH COLUMBIA–(Marketwire – June 8, 2009) – Dynasty Metals & Mining Inc. (TSX:DMM – News; “Dynasty” or the “Company”) is pleased to announce that it has successfully commissioned the crushing and milling sections of the gold processing plant at its Zaruma Gold Project, in the El Oro Province of south-western Ecuador. Dynasty expects to commence production in the next few weeks.

The Company continues the construction of three declines and exploration work to identify sites for new declines to allow for future expansion of mining activities. Dynasty expects to be able to process approximately 400 tonnes of ore per day by the end of June, increasing to the equivalent of 300,000 tonnes per annum during the third quarter of this year. Upon reaching this steady state, the Company will work towards expanding ore extraction to optimize plant capacity. The material mined during the construction phase of construction of the declines is expected to be of lower average grade. The average grade will increase as we move nearer to our primary targeted resources which reside at slightly deeper levels.

All mine development activities are now fully underway and the Company has purchased the substantial majority of required equipment which is either at the mine site or in-transit to Ecuador, including eight Jumbo’s, six 5 and 6 yard underground loaders, eight 2.5 and 1 yard underground loaders, two 725Cat Haul Trucks, two 950Cat Loaders, one 966Cat Loader, three 953Cat Track Loaders, two 420Cat Backhoes, one 20 tonne excavator, two electric drills, five telehandlers and one shotcrete machine. In addition the Company has contracted out other necessary services such as transportation.

The slight delay from Dynasty’s previously estimated development schedule is primarily due to the Ecuador government mandated suspension of mining activities. The suspension, which was recently lifted, created unforeseen restart challenges and caused delays in sourcing and importing certain mining equipment.

The Company currently has net working capital of approximately $16 million.

The Ecuador government has indicated to the Company that the regulations under which the Mining Law will be governed are due to be released in the near future. Dynasty has been advised that the regulations will assist in setting out the framework of exploitation contracts. Dynasty continues to work closely with government officials and regularly apprise them of its progress and plans with respect to the Zaruma Gold Project. The Company has not received any indication that such plans are at risk as a result of probable government intervention or policy.

Last week it was reported that the Ecuadorian government signed a cooperation agreement on mining exploration and development with Codelco, the copper mining company owned by the Chilean government. We view this as a positive step toward developing the mining industry in Ecuador.

– the Company has registered its projects with the new National Water Authority and submitted updated Environmental Impact Studies to the Ministry of Mines and Petroleum as required under the new Mining Law;

– we have been advised by the Ministry of Mines & Petroleum that once the regulations to the Mining Law have been released they will resume processing permit applications, including the mine and plant operation permits the Company has submitted for the Jerusalem Project; and

– the Company has now made the decision to ship two previously purchased diamond drills, which were being stored in Canada, down to Ecuador. This will bring the total number of drills the Company owns in Ecuador to four. The drills will be used at Zaruma to assist in identifying locations to develop future declines and to recommence exploration activities at other projects in the future.

Photographs of the Zaruma Gold Project will continue to be update and are available on the Company’s website at www.dynastymining.com.

Julian McDermott, a member of AUSIMM (Australian Institute of Mining and Metallurgy) and a “qualified person” within the definition of that term in National Instrument 43-101, has supervised the preparation of the technical information contained in this news release.