Following on from yesterday’s post that noted the recent rebound in the Chilean Peso (CLP) compared to all other Americas currencies (including the US dollar), here’s a way of playing Chile’s currency strength without all that mucking about in the forex market and with leverage to boot.

ECH is the iShares Chile ETF, with a basket of local stocks from the Santiago bourse. But really and truly it’s less a play on companies and more a play on the CLP, as this one year chart shows. 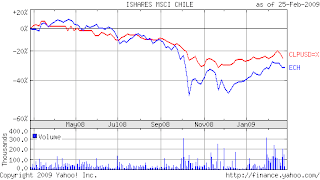 But if we now focus in on the three month chart, the leverage to the CLP is shown. The Peso has outperformed other currencies ever since the Bachelet government took the gloves off and started getting countercyclical on the recession that’s affecting Chile and the world, tapping the reserves it had squirreled away in the previous boom years. 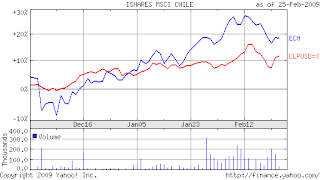 So with copper looking like it will be used as a “Obama stimulus will save us all” vehicle to the upside, playing the CLP via this ETF is a simple alternative that may offer decent leverage in the next couple of weeks. Today ECH stands at $33. I’d envisage this as a short-term play and would provisionally target $40 or so, I suppose, without getting too slide-rule accurate or deep into my own calculations. That target could adjust at any moment. Here’s the price chart for ECH that shows how it’s come back from the doldrums but has plenty of room before it regains its mid 2008 position. 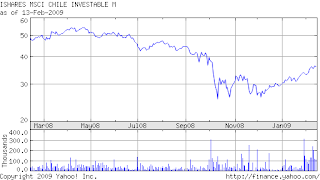