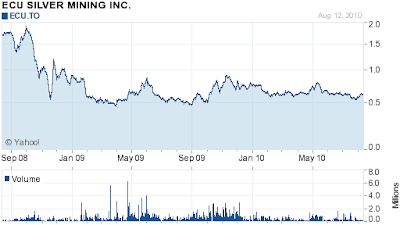 The instructions for this week’s competition are simple:

1) Download this PDF. It contains charts generated from the earnings reports of ECU Silver (ECU.to) dating back to 2007. The charts include the 2q10 earnings report figures that ECU.to filed yesterday but no written comments.

2) Send the PDF to Mike Kachanovksy, aka ‘Mexico Mike’ and owner of this website that has relentlessly pumped ECU Silver to the world in all this time.

3) Ask Mexico Mike to explain the evolution of the numbers shown in the charts to you. He should consider this a test of his own earnings report analysis skills.

4) Ask Mexico Mike whether he has made a mistake in relentlessly pumping ECU Silver (ECU.to) to the world and whether he should have paid more attention to the company financials and balance sheets all this time.

UPDATE: So apparently Mexico Mike thinks I’m (and I quote) “a disgrace to the mining community“, which made me laugh, coming from a guy that can’t read a balance sheet and takes sponsorship money from the very people he should be redflagging to his members. Mike, the only mining community that feels threatened by me and resorts to calling names is the community of scamsters and self-servers who don’t like plain truths about themselves in print.

And another thing: I don’t consider myself part of the mining community, which is probably the thing that people like you are most worried about. The disgrace of the mining community is much more likely to be the way that its close-knit, buddy-buddy way of existence stops anyone with a public voice from speaking out against the hundreds upon hundreds of bad apples in its midst that constantly rip off the investment community. Mexico Mike, your silence is far more disgraceful than my plain speaking. Now go fuck yourself.