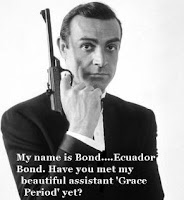 It’s that man again!
As those following the Ecuador bonds soap opera know, on Thursday 20th November the big bad audit report is being made public by Ecuador. The people who were asked to do the investigation are the “Comisión de Auditoría de Crédito Público” (Audit Commission of Public Credit) and said comission handed in their recommendations to President Correa in September. This was pointed out today in this report in Ecuador Inmediato (subscription site, but free to join). Franklin Canelos, the Veep of the commission, confirmed in an interview with Radio Quito today that:

“On Thursday the Commission’s Report will be made public. It is not that the President does not know the report, because it was delivered at the end of September as was our commitment.”

Now as you know, your humble Otto loves you as if you were his own children. And so on the next three links is the confidential powerpoint presentation that the audit commission handed over to President Correa back in September (along with the full written report). Be warned that;

All that said, the three PPT files that constitute this report are extremely interesting reading (and that’s putting it mildly) if you have skin in the EM bonds sector.

This is part one, that concentrates on the multilateral debt

This is part two, that concentrates on the Global/Commercial debt (this includes the Global 2012 and 2030 paper and is perhaps the most pressing information at the moment, though I must stress that all three parts are important)

This is part three, that looks closely at the bilateral debt and the Paris Club

So help yourself, download the information and read all about it a full day before the rest of the world. I hope your Spanish is up to scratch (mine is :-). Remember where you heard it first, people. And before you ask, I’m not telling you from where these came.