Ecuador, Canada and that revolving door at the finance ministry 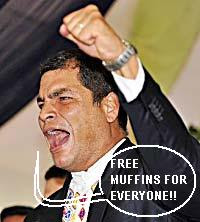 ECUADOR — Viteri Quits Finance Ministry; No Changes in Policy Expected (click here for link to Telegrafo story): Maria Elsa Viteri, the finance minister of the Correa government, tendered her resignation after assuming full responsibility for an accusation made by her office that a group of professors earned salaries close to $9,000 a month — the teachers pointed at by Viteri aren’t precisely the staunchest Correa supporters. The reason seems quite innocent, and it wouldn’t be surprising that Viteri and her team are chickening out as fiscal revenues shrink, the economy deteriorates and the need grows for a tough policy correction. The stance towards bondholders will stay the same (it seems to be something already decided between Correa, his Rasputin and Interior Minister Ricardo Patiño, and the Economic Affairs Councilor Borja.)

Meanwhile President Studmuffin has been winking and smiling at Canada again. Remember this post on Feb 5th when he lunched with the Canadian ambassador and made happy smiling noises about Canada? Well he did the same yesterday, inviting a whole bunch of Canadian bizpeople over to the Presidential palace for tea’n’buns. Apparently he’s looking for investment in oil&gas, hydroelectricity, mining (natch), tourism, construction etc. Here are the quotes from Ecuador’s newspaper of record (i.e. best of a bad bunch) El Comercio:

“We think that there are many opportunities for business and I reiterate to you; Canada is a country that has always been a great friend of Ecuador’s.”

“Ecuador has many profitable projects already defined. Another potential is the tourism sector, and we sincerely think that the Canadian market has been unexplored by us.”