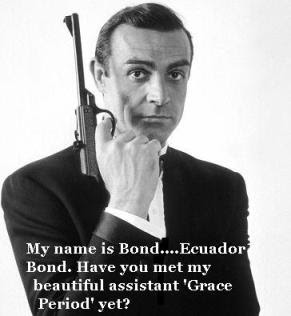 ……that the industry already knows. Today is the “revelation” that a lot of the Ecuador bonds under pressure are covered by Venezuela. Sure enough Bloomberg is back to its mediocre standard with this note that cherrypicks its way through the subject and only offers the disaster scenario without any balance of common sense.

Interesting that they should choose Barclays to quote, as according to that band of failures Ecuador needs oil at $95 next year. Why is that strange? Read this excerpt of an interview over the weekend with Ecuador’s FinMin Viteri and file it under “yet another thing they forgot to tell me”:

We have to understand that with the changes in the new Constitution the pro-forma budget won’t be able to be used until the second half of next year. In election season what we need to talk about is using the budget of 2008 calculated to August 31 2008 and prolonging it through 2009. It would need the price of oil at less than $35 for us to have problems in 2008. What’s more, there are new revenues that are not quantified such as those of Law 42. There are between U$400m and U$500m that should come in next year. U$100m has already come in. We are meeting with the tax office on a monthly basis to correct the budget which we are estimating. So it’s not worth talking about the exact (barrel reference) price that I will use, we’re waiting until mid December.
xxxxxxxxxxxxxxxxxxxxxxxxxxxxxxxxxxxxxxxxxxxxxxxxxxxxxxxxxxxxxxxxxx
Or on other words, the $95/bbl guess (can’t call it anything else) was just silly because
You ever wonder about that expression they use in investing, “If it’s in the news then it’s too late”? That’s because they won’t tell you the full story until it suits them.
Ecuador will not default.