Ecuador’s mining law; the passage and the protest 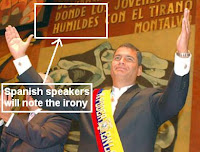 A quick update; yesterday Studmuffin said he was changing a small (and inconsequential for foreign mining companies) part of the new mining law and would sign it into law this very week. Just part of the i-crossing-and-t-dotting mentioned last week.

Meanwhile, today’s protests organized by indigenous umbrella group CONAIE is taking place as scheduled, with roadblocks reported in the main Panamericana North highway to Colombia as well as the Azuay region that was the centre of last week’s protests. Importantly and fortunately, CONAIE has said that it wants and is getting peaceful protests from its supporters.

This afternoon the protest is due to take the form of marches and town square meetings around the country. All in all, the whole thing is going as expected; CONAIE gets to play protest politics and appeases its anti-mining members without upsetting Correa or its pro-mining members too much and then the mining law becomes active a few days later. What they call down here “un negocio redondo”.