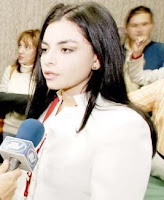 Elena (for it is she)
On the night of Wednesday September 16th, the TV journalist Elena Rodriguez was attacked by three armed men, beaten, pistol whipped and left in the streets of Quito, Ecuador. A stencilled death threat was left on the windscreen of her car that make it clear the attack was politically motivated and said she wouldn’t be so lucky next time. Her injuries were not life-threatening but the pistol-whip knocked her cold and drew blood and the punches left her bruised all over and confined to bed on medical orders for 72 hours.

The story is featured in dozens of reports in Spanish language press, but as far as my Google skills carry me I cannot find a single English-language report of this cowardly attack on a journalist. I’d wager that you find it strange that the story of full-on violence against a journalist isn’t making the normal shock-horror headlines, as the slightest aggression towards reporters is enough to make them close ranks, never mind a 3-on-1 whackattack like the one Elena went through.

The reason? Elena Rodriguez works for Telesur, the leftwing pro-Chávez network. Therefore she’s ignored by the biased press that fills your head with one-sided crap about LatAm. On the other hand, ruffle Andres Oppenheimer’s hair*, blow a kiss to Simon Romero in Cuzco or dare to mention that Moris Beracha is a wealthy man in polite company and you get the freakin’ human rights police investigating the case.

*what’s left of it