Top of the shop: They were pretty good. Now for details and here’s the silver chart for the quarters gone, including the latest set of figures for 4q13:

Guanacevi’s 861,495 oz silver produced is a mine record and a very decent performance, that figure stands out. The Bolanitos 698.098oz is lowerthan previous quarters as the boost from toll milling from Cubo falls off. Meanwhile Cubo’s 372,124 oz shows gradual improvement at the mine, along the lines of the company plan. In total EDR churned out 1,931,717 oz silver, a company record quarter and 700k oz up from this time last year.
Here’s the gold chart:

The obvious weak spot is Bolanitos, which was 5,700 oz Au down on the previous quarter. That’s around 340k oz AgEq and a substantial drop. though the company is bound to tell you how it was programmed and expected due to the change in mined mineral. Whatever they say, it takes the edge off the above silver production numbers.
Here are the average grades for silver from the top two mines, which shows them recovering from the slump of 2012/early 2013.

That may be the company doing a bit of high-grading in the face of the silver price slump, but they’re also grades inside the acceptable historically. It’s a set of numbers to monitor in 2014, whatever happens (as as the end year reserves/resources figures, which will be out later).
And while all that above has been going on, the share price has done this: 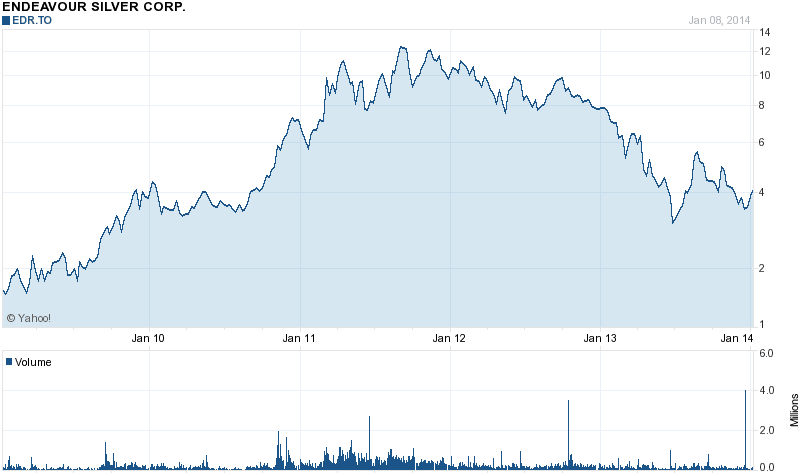 Which is the acid test. It’s one thing to produce more metal, quite another to do it profitably. The 4q13 numbers point to a better quarter but until the rubber hits the road and we have a decent and chunky bottom line dollar profit from EDR, as far as I’m concerned the jury stays out.
Disclosure: No position in EDR.to of any sort.