Good old stick and batman Iwnattos, dictator and overlord at Market Narrative, likes B2Gold (BTO.to) as do many others (including your author, but no position at this time) and rightly so, as BTO is a good little gold producer. So for his dee lek tay shun here are a couple of charts on the company after its 2q12 results were filed last night and also a snipped from the financials. Between these three things, we get a flavour for the three main themes of the BTO quarter (I think). First up is working cap, which dropped in the quarter.

That’s because the cash pile came in surprisingly light at $77m or so. But I wouldn’t fret too much about this balance sheet item because the reason BTO has less cash is that… 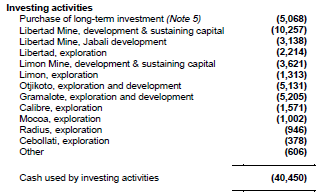 …it’s been spending oodles on its investments. As well as $5.068m in shares of Calibre Mining (that’s the top item), BTO has been ploughing cash into just about all its assets, particularly the Nica mines (Libertad and Limón). This, of course, is a good thing. Meanwhile, the other main takeaway from the numbers can be seen (just about) in this P+L chart…

…which is that on an operations basis, BTO had a very good quarter. Production was up and slightly above target, but thanks to the previous production NR we knew that already. What last night’s numbers told us was that BTO got those ounces out the ground very efficiently, spending just $28.853m on COGS (it was over $32m the two previous quarters). I’m guessing the pre-strip work undertaken by BTO previously is now paying off, but will be listening in on the ConfCall for confirmation of that.
So anyway, we’re looking at a good quarter from Iwnattos’s muse. The thing left to decide is whether its operations merit adding to an already pretty rich market cap. The valuation is already running 2 1/2 times equity, after all. BTO is a very good gold mining company, but everything has its price.

UPDATE: On trudging round the interwebs, I come across this Reuters report on the numbers entitled “B2Gold profit falls on higher costs”, which shows you just how little the reporters actually understand about quarterlies and how little brain is engaged before they get to their keyboards.  Comparing net incomes YoY on a company like BTO is not the way to move forward, you freakin’ dumbass hack, but worse is that your sub-ed didn’t pull you up on this. People, you are supposed to be financial reporters so why are you so keen on demonstrating that you know fuck all about financials?