So much for the DEA. Here are the solid statistics that show how Bolivia has increased drugs interception and confiscation since the DEA were thrown out of the country. 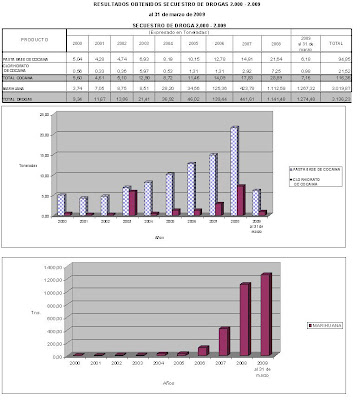 Click to enlarge
This top chart shows the amount of cocaine confiscated in Bolivia every year since 2000. The 7.19 metric tonnes so far this year is right on schedule to match the 2008 totals. Remember that the DEA were thrown out in 2008. Since that time drugs interceptions have clearly rocketed.

On to the perhaps even-more impressive bottom chart. Although cocaine is the headline drug of Bolivia, the country is also a big marijuana-growing area especially in the eastern provinces of Santa Cruz and Beni. This second chart shows the really impressive job the Bolivia FELCN anti-narco police force has been doing against the marijuana traffickers since the US DEA left town. In the first three months of 2009 Bolivia has already confiscated more marijuana than in the whole of 2008, in itself the all-time record year. Again, it surely makes you wonder what the DEA was doing all this time, doesn’t it?

Oh, and by the way, since January 2008 the FELCN has grounded nine light aircraft used by the drug scum out of commission and locked away 4,363 people, too. All details from the relevant website right here.

It’s strange that left to its own devices, Bolivia (as it said it would) has become far more effective in the fight against drug trafficking. Remember that the USA took away the ATPDEA preferential trade deals in late 2008 because it said it wasn’t doing enough in the so-called “war against drugs”, but even without trade deals and DEA leadership, Bolivia is doing a far better job than at any point under the US anti-narco lead. As the Vice Minister in charge of operations, Felipe Cáceres, said yesterday:

“Despite the fact that the opposition and media want to discredit the work of the FELCN, the national government is hitting this illicit activity hard. “The neoliberal governments that protect nacrotraffickers and repress coca producers ran between 3,000 and 4,000 operations every year, something that doesn’t happen with this government that, under its policy of zero cocaine and zero illegal drugs, is leading a massive struggle against the people and family clans involved in narcotrafficking, and with positive results.”

Seriously, it’s about time people started asking the DEA exactly what it was doing all this time in Bolivia and whether, as both long-standing rumours and the recent statistics indicate, the DEA really was part of the trafficking problem and not its solution.

And what are they doing in Colombia?