“If I told them once I’ve told them a hundred times, to put Spinal Tap first and puppet show last,”
Jeanine Pettibone, This Is Spinal Tap

Today brings a news release from Excellon Resources (EXN.to) that goes by this jolly headline:

And of course we all go “WOAH! That’s a serious drill cut!” After all, even at today’s long-extended gold/silver ratio (around 85X) that AgEq works out at 32g/t gold equivalent. There are a long list of precious metals mining companies that would like to report 15m of ounce-plus gold. Mind you, we should be kind of used to high grade intercepts out of La Platosa, it is the nature of the beast and its issues so far have been getting the rock to surface, not drilling through it (again).
Which brings us on to the real reason this posts exists, as we got another buried lede for you. That innocent-sounding “…and provides production update” tacked on the end of the flashy hole headline, down on paragraph seven, under the bullets and tables and stuff, turns out to be this:

Production Update
The
Company anticipates production in the quarter to be approximately
300,000 AgEq ounces due to operational issues related to surveying and
planning personnel and lower byproduct prices. The operational issues
have now been addressed and the operation is getting back on track. The
Company’s balance sheet remains strong, which will allow the Company to
weather recent dips in commodity prices and quarterly production
variability.

Oh. So what we need is a bit of context. Chart, please! 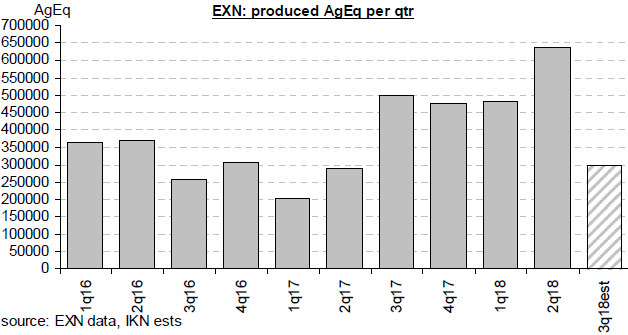 Yes, that’s what Q3 looks like. And who knew surveying and
planning personnel could take half your production schedule away? Maybe other mining companies should pay them more, just in case it happens to them.