Far more important than kicking a ball around a field 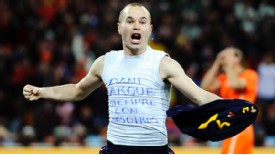 When Andrés Iniesta scored Spain’s winning goal in this year’s World Cup final against Holland he peeled off his shirt to reveal a message underneath, “Dani Jarque, Always With Us”, in homage to his close friend and fellow pro footballer who died of a heart attack aged 26 in 2009.
Jarque was captain of Espanyol, the other team in the city of Barcelona and bitter rival of Barcelona (as city rivalries tend to be, of course). This weekend, Espanyol hosted Barça and got a thorough 5-1 drubbing from the world’s greatest club team (at the moment, anyway) but at the end of the match, when Iniesta was substituted, something special happened.
The Espanyol fans, normally without a good word for anything Azulgrana and on the receiving end of five goals from their enemy, remembered Iniesta’s gesture to their dead captain and gave him a standing ovation as he left the field. The Espanyol players joined in, too. A moment in sport and life.