File this one under “Embarrassing for Evo” 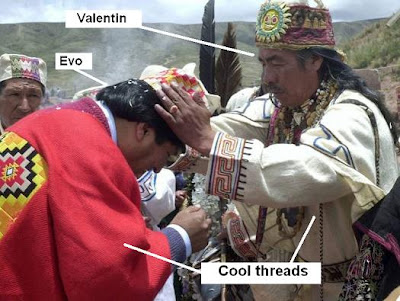 Clarín has the report, Otto does a translation.

Valentín Mejillones Acarapi, who was in charge of the Bolivian President’s investiture ceremony in 2006, was arrested at his home in El Alto “while working on the washing or purification of cocaine“, according to the local anti-drugs commanding officer.

Valentín Mejillones Acarapi, 55, was captured Tuesday in the Andean city of El Alto next to La Paz, when the existence of a cocaine factory was discovered in his house. His son and two Colombian nationals were also detained who had in their possession 350kg of liquid drug, according to police reports.

“In the operation we found four people, a Colombian husband and wife and the other two people, father and son, owners of the house, working on the washing or purification of cocaine“, said Colonel Félix Molina, commander of the anti-drugs police.

Mejillones was today identified as the principal Aymara priest who on January 22nd 2006 invested Morales as leader of the indigenous peoples in a religious ceremony at the pre-Inca temple of Tiwanaku, one day before taking office as the President of Bolivia.

A government spokeperson, Iván Canelas, denied any relationship between the Morales government and the detainee, saying that, “according to the investigation he should be sanctioned if found to have committed a crime.”